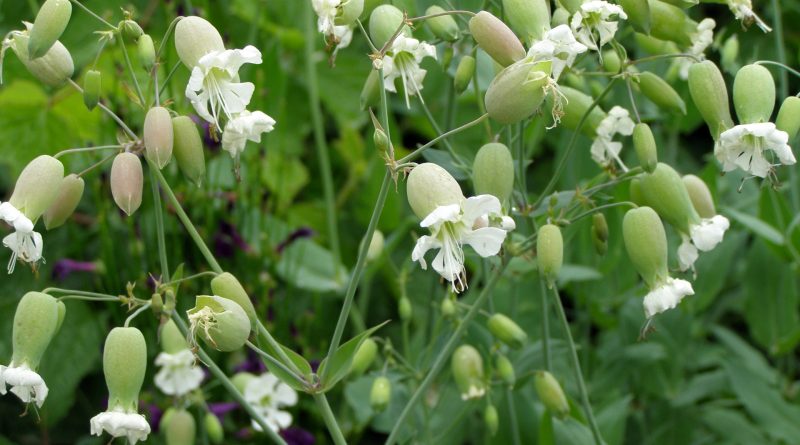 The Silene bloated (Silene vulgaris (Moench) Garcke) is a small plant (up to 60-70 cm high, 100 cm maximum) and perennial glabra, with characteristic flowers called “Bubbolini”, belonging to the Caryophyllaceae family.

Etymology –
The term “Silene”, according to some, derives from the greek “silenos”, the name given in Greek mythology, a semi-divine companion of Dionysus and father of the satyrs, half man, half horse, characterized by a bulging belly (which would refer to the shape of the glass). Still others comes from the greek “sialon” which means “rose”, “mucus” referring to the white, sticky substance found in the stem and calyx. Still others trace it back to “Selene”, “moon” because some species have flowers that open at night. The term “Vulgaris” comes from Latin and means “common” for the wide distribution of this species.

Geographic Distribution and Habitat –
The type Chorological of this plant is defined as “Eurasian”, then the origin from the cold zones – temperate northern hemisphere. It should be noted that given the breadth of the distribution of this plant (with its many varieties), some authors consider the geoelemento as “Paleotemperato” almost sub-cosmopolitan (ie present in almost suits over the world).
The Silene vulgaris is present in Europe, Asia, North Africa, South America. In Italy it is common in all regions.
In Italy it can be found in lawns, shrubs, sparse forests and edges of paths. The plant is sinantropa and nitrophilous, is frequently so its presence in ruderal areas rich in nitrogen, or even in the fertile meadows fertilized and antropizzati. In some cases it may be considered weed.
Its altitudinal distribution is from 0 to 2800 m s.l.m .. 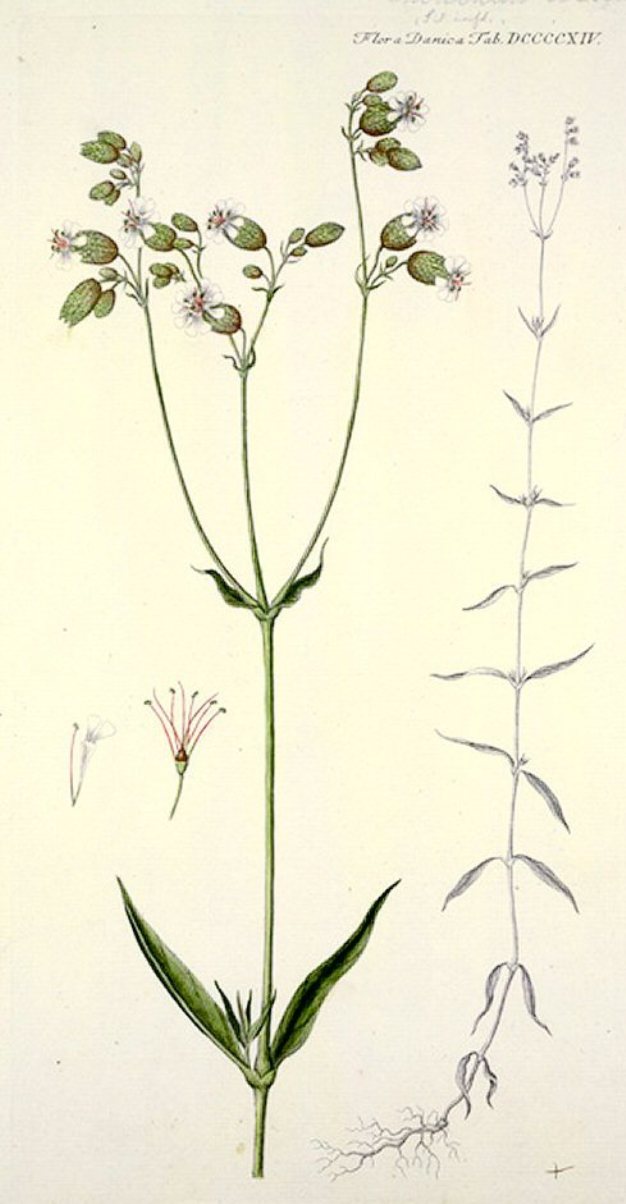 Description –
The Silene is a perennial herbaceous plant with stem and leaves very variable morphology. The sub species “vulgaris”, in particular, is glabra or slightly pubescent. The stem can reach 70 cm high. The leaves are linear-lanceolate, acute but not sharp, opposite, fat, remove stems and hugging the stem at the nodes. The flowers are carried by peduncles supple meeting peaks; the cup is toothed ovoid, swelling, with more or less ribs, greenish or purplish and that shape is reminiscent of a balloon. The corolla is formed by white petals completely divided into two laciniae subspatolate or oblanceolate.

Cultivation –
Although the Silene vulgaris is a spontaneous plant lends itself very well to being cultivated. For the cultivation technique, the following sheet can be consulted.

Customs and Traditions –
Much sought in gastronomy (as of Grisol, strigoli, stridoli, carletti, smears, scrissioi, or sclopit ciopit-s, s-ciopetin, cuiet in Piedmont and Marche Apennines Umbro better known as concigli), but others terms adopted are: Bubbolini, Crepaterra, cuin, Grass cucco, Minute, Schioppettini, Sciopeti, stridoli, Strigoli, Stringoli, Sgrizoi, Madonna noodles, Verzuli, Lacitt.
The Silene is one of the best edible herbs, but only before flowering; after which the lower leaves become too tough. They are eaten either raw, or cooked (such as spinach), in risottos, soups, stuffed ravioli and omelettes: they have a sweet, delicate flavor.
A food purposes, in the spring, using the young florets; these, gently scrub, produce a characteristic squealing.
It is good mellifera, the root contains saponins.
Much sought after by cattle, it is an excellent fodder.
It was once thought had diuretic functions and was also used as a remedy for gout, shingles and against anemia. Unfortunately research has little interest of this plant from the therapeutic point of view.
Although catchfly is an ancient food plant, its lack of commercialization (it is not spontaneous herb cultivated) has made it performs the amount of studies available on its nutritional and medicinal properties. While vegetables grown are familiar with the nutritional properties and the most species used in herbal medicine (valerian, calendula, etc.) They know all the medicinal properties of strigoli little is known.
In terms of nutritional value, they have a good Vitamin C content; recent studies have shown a high amount of minerals and phenols, antioxidant compounds beneficial to health: the content of these micronutrients is higher than that detected in spinach.
Another study on the nutritional properties of strigoli reports these values:
Water 88%;
Lipids 0,6 – 0,8%;
Fiber from 3.1 to 3.5%;
Carbohydrates available 3.9%;
Protein 3.6%.
Among the fatty acids we report the presence of oleic acid, linoleic, linolenic, erucic, palmitic and stearic. As for the medicinal properties, the only information known is that the extracts of this plant are extremely emollient. For this reason, the species Silene vulgaris is widely used for the production of certain soaps for the skin. In the past and even today, the preparations stridoli are used to treat ophthalmia (eye disease).
Today the plant is not included in the official list of medicinal plants and is used in herbal medicine.
Containing different sugars, it may be useful for the reinstatement of these elements in people who are deficient.
The Strigoli are linked to childhood memories of many people, especially those experienced in the country. The boys in many regions used to do the “scattiole” with flowers of this plant; closed with your fingers the opening of vesicular cup that, therefore, it crushed the back of the hand or forehead, producing a loud bang, from which the vulgar names and Schioppettini Schioppetti.

Preparation Mode –
Novel jets of Strigoli vegetables are one of the best known in fitoalimurgica tradition of our territory, a real treat for even the most discerning palates. They are used as components of boiled mesticanze, which confer a particular tone, but mostly they are boiled in water, mixed with beaten eggs with the addition of sheep’s milk cheese and pepper, then fried in the form of meatballs.
The tender shoots that are removed in the spring to a length of 5-6 cm, are boiled for a few minutes in the water and you consume, as mentioned, as a side dish to eggs or other dishes, like the most common spinach. Among them are packaged risotto very delicate flavor, but can also be blended to omelettes and seasonal soups.
To appreciate the goodness of the silene must grasp in time, ie before the bud take to harden. If intendessimo use for risotto, it is recommended to cook the rice in water for boiling the vegetable itself: the dish would purchase value and flavor.
Food L`uso of the tops and leaves of Strigoli has a national circulation. In Bresciano they are baked with a little water in a covered pot and serve as a side dish of cooked meats. In the same region are used for tasty risottos lean. In Veneto they are sought for soups, stews, and especially for the classic rice soup and fried d`erbe. In Tuscany they are eaten cooked, in the guise of spinach, or used for the filling of the Sienese cakes or pies Lunigiana. In Romagna they are used as a colorant in the green paste, as a flavoring in ricotta tortellini and to do the typical tortillas. In Rimini they endeavor to prepare raw salads, pasta and ravioli.
In the area of Cesi Serravalle del Chienti, it is used to prepare a characteristic strudel that is consumed on Ascension Day.