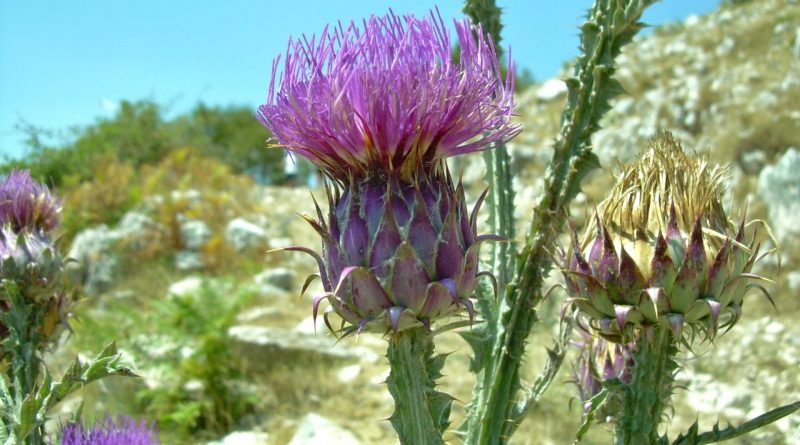 The largest hollow (Onopordum illyricum L., 1753) is a herbaceous plant belonging to the Asteraceae family. It is a biennial cycle plant with gems placed at ground level.

Etymology –
The name of the genus comes from the Greek “osnos”, donkey, and “pordè”, pet, with reference to the supposed effects of intestinal turbulence that the plant gave to the donkeys, as they were grateful.
The specific epithet comes from the Latin “illyricus, -a, -um” of Illiria, an ancient region of the eastern Adriatic.

Geographic Distribution and Habitat –
Onopordum illyricum is spread on the northern slope of the Mediterranean basin, from Portugal to Lebanon, including the Balearic Islands, Corsica, Sardinia, Sicily and Crete. The species was introduced and naturalized in Australia and California where it is considered an invasive species. In Italy it is present in almost all the central, southern and island regions (it would be in Puglia); Has been reported as an adventurer also for Friuli Venezia Giulia.
It grows in the Mediterranean prairie, especially in the fields unpaved, along the edges of the streets and its area is limited to the Mediterranean coast and coincident with that of the Olive from 0 to 1200 m s.l.m.. 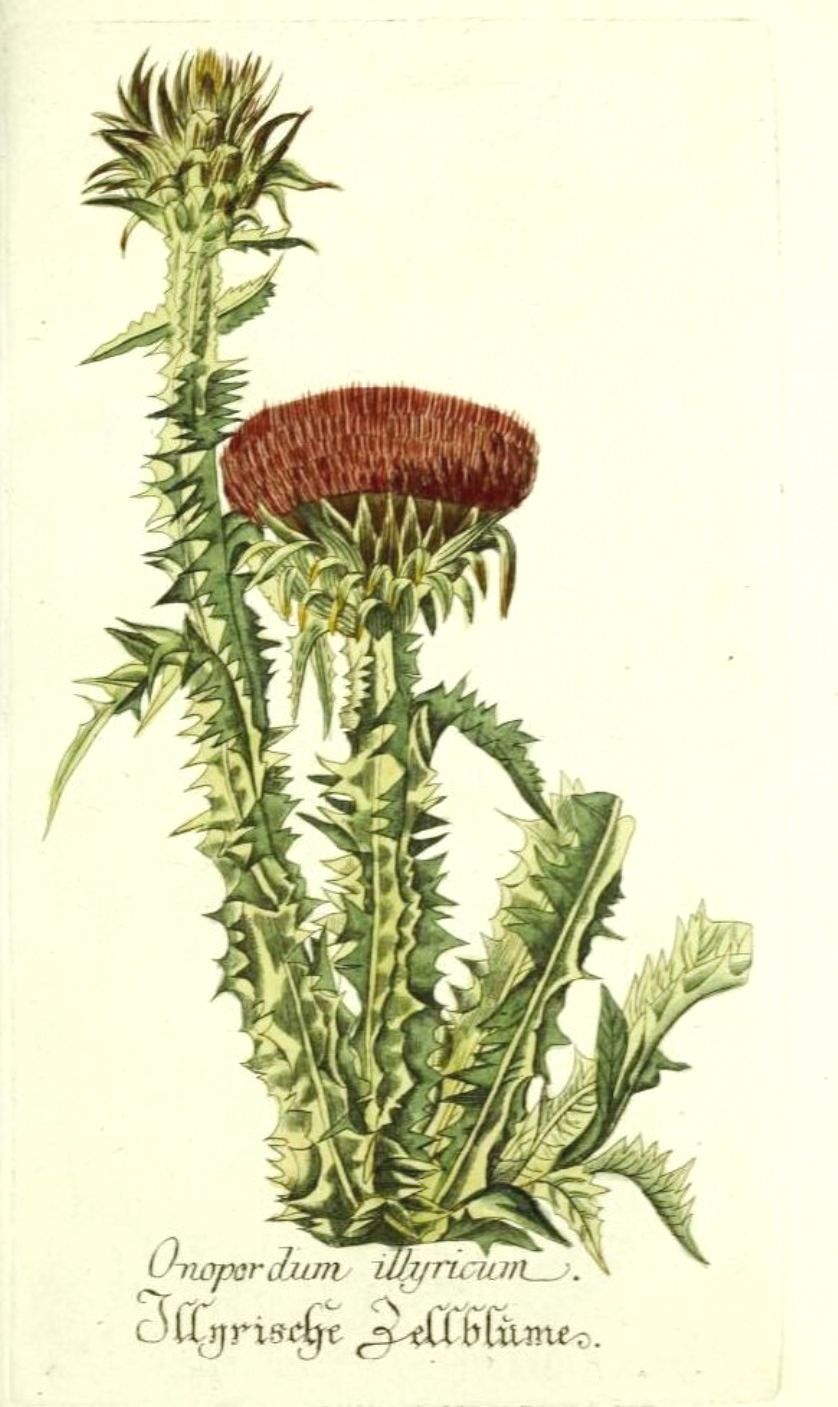 Description –
The largest hollow is a biennial or perennial herb plant, with blades up to 2 m tall, winged and thorny. The basal leaves are pennato-partit or pennatoette, spinosa, covered with a dull whitish hair; Those caulis on the stem, with thorny lateral divisions, up to 2 cm long.
The inflorescence is a globular terminal pebble, with purple tubular flowers, or very rarely white. The receptacle is naked, without flakes or hairs, with dental flosses.
The fruit is a croissant with transversal grooves and clothed pappa.

Cultivation –
For the possible cultivation of Onopordum illyricum, as with similar species, it must be considered that the pollination of this plant occurs through insects (entomogamous pollination). Fertilization occurs basically through the pollination of flowers.
The seeds thus produced falling to the ground (after having been transported for a few meters by the wind due to the pappo – anemocora dissemination) were subsequently scattered mostly by insect-type ants (disseminating mirmecoria).
If you want to collect the seed to reproduce it, you should clearly intervene a few days before this phenomenon (considering that the Antesi is in the variable period between June and August) and keep it for the previous year.
For the next cultivation it is advisable to prepare a semen at the beginning of the spring period and to transplant the young seedlings in the field as soon as they are of adequate size. Considering that the plant is two-yearly, special attention should be paid to their regeneration as, with the anemophilic spread of seeds, it can become poisonous.
In areas where it grows spontaneously, no special agronomic practices should be carried out, except those from other herbs in the area where it is implanted.
As with other spontaneous alimurgical species, it is not easy to devote more particular agronomic treatments (fertilization, irrigation, etc.) as mother nature provides for its “initiative”.
Of this thorny plant, essentially the collection of still young basal leaves and immature inflorescence are collected. The basal patch is eradicated with a patch, deprived of the outer coriaceous leaves leaving only the inner ones to which the distal portion is eliminated. You get a besium ready for a subsequent manipulation. The inflorescences, similar to those of Artichoke, cut slightly below the base. In some places in Sicily, it is also used to harvest for food purposes the tender part of the scapegoat, close to the inflorescence, as is the case for horticultural artichokes.

Uses and Traditions –
The fleshy recipe of the pea of ​​the chief horseradish is edible and has a sweet and pleasing flavor similar to artichoke. The drums and shingles of the leaves, thorns of the thorns, can be fried in batter.
The major Onoporto has antibacterial and hypotensive properties. Its root is used raw in the kitchen.
Among the traditions tied to the Oopofusum illyricum contains one that was a real test for the wedding (in the ethno area of ​​Milo) where it is ancient folk belief that the unmarried girls, waiting for husband, used the inflorescences of the Oopper for To know the imminence or not of their wedding. In this regard, on the eve of St. John’s Day, they searched for one of these plants, truncated a not fully mature inflorescence and submerged it in a secret place. The next day, at dawn, after dissecting them, they crashed her carefully by examining the color of flowers. If these were white, marriage was still far away, but if it looked colorful it was a sign that they would be married in the year; The imminence or not of the wedding was related to the intensity of the dye.

Methods of Preparation –
The bore of the Ounopordo leaves to wind up for several hours, so that the pegs of the leaves lose part of the pungolosity, thus removing the lamina leaving only the medullary ribs (ribs). This operation should be done leaf leaf, using a knife or a pair of scissors. Finally, it removes the root by truncating it to the collar. It is thus obtained a torso surmounted by the foliage, which is cooked in the same way as the cultured artichokes. The inflorescences of the Ounopordo, eliminated the leaves of the stem, are boiled in plenty of water; Of these they consume the keeping and fleshy bases of the scales, similar to the cultivated artichokes (Cynara cardunculus L. ssp. Scolymus (L.) Hayek) and wild ones (Cynara cardunculus L.).

Sources
– Wikipedia, the free encyclopedia.
– Treben M., 2000. The Health from the Pharmacy of the Lord, tips and experiences with medicinal herbs, Ennsthaler Publisher
– Pignatti S., 1982. Flora of Italy, Edagricole, Bologna.
– Conti F., Abbate G., Alessandrini A., Blasi C. (ed), 2005. An annotated checklist of the Italian vascular flora, Palombi Editore.
Please note: Pharmaceutical applications and alimurgici uses are indicated for information purposes only, do not represent in any way a medical prescription; it accepts no liability on their use for therapeutic purposes, cosmetic or food.