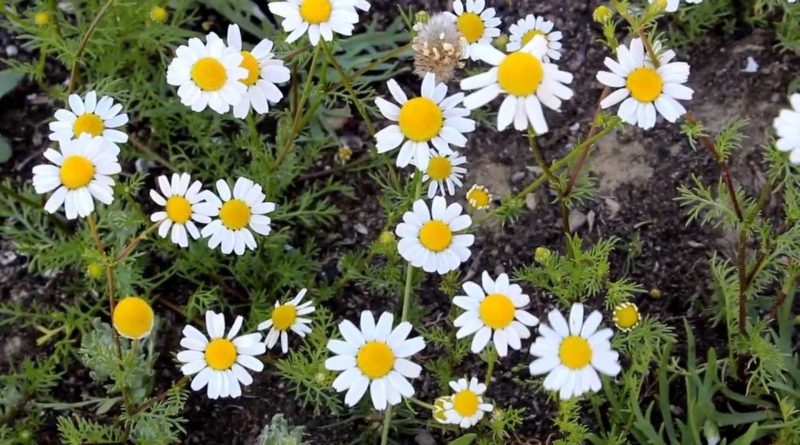 Chamomile (Matricaria chamomilla L.) is a herbaceous annual plant of the Asteraceae family. It is an annual plant with elongated flowering leaves, often without leaves.

Etymology –
The name of the chamomile comes from the Greek χαμαίμηλον (chamáimēlon). This word is formed by χαμαί (chamái), “soil” + μήλον (mḗlon), “apple” in reference to the smell that emits that resembles that of the renetta apple; This derivation is also preserved in the Spanish name manzanilla, from manzana, meaning “apple”. The name of the genus, Matricaria, comes from the Latin mātrīx, mātrīcis, which means “uterus”, with reference to the calming power that this plant exerts in menstrual disturbances.

Geographic Distribution and Habitat –
The chamomilla species is widespread in Europe and Asia and is also naturalized on other continents but its distribution is not cosmopolitan and presents many important gaps. It grows spontaneously in meadows and open countryside, it often becomes intrusive as an insect crop of agrarian crops. It often infects cereal crops and is present in the uninitiated, along the streets, at homes, in landfills and in gardens. The altimetric distribution ranges from 0 to 800 m and rarely moves up to 1,500 m s.l.m.
Chamomilla Matricaria is a rustic species that also adapts to poor, moderately saline, acidic soils. The vegetation cycle is spring-summer, with late spring flowering and during the summer. 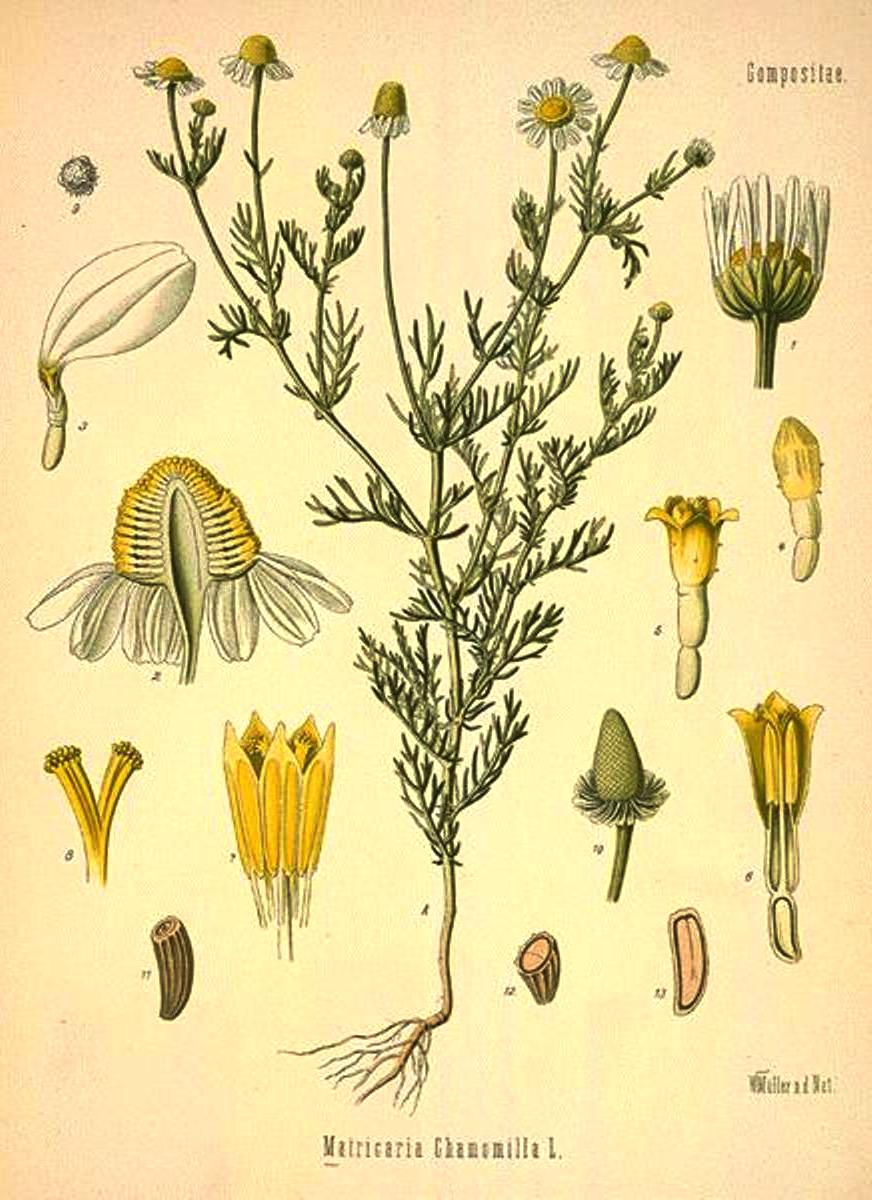 Description –
The chamomile plant has roots in stitches and a bushy growth, with more stems leaving the base, more or less branched into the upper portion. The height usually does not exceed 50 cm in spontaneous forms, while in cultivated varieties it can reach 80 cm. The plant is extremely aromatic.
It has alternate and sessile leaves, oblong. The lamina is two or three-pointed, with very narrow linear lacinias.
The flowers are gathered in small caps with conical and cable receptacle. The external flowers have the white ligula, the inner ones are tubular with yellow corolla. Capsules of 1-2 cm diameter are clustered in corpus peaks. These flowers have a pleasant aromatic odor and contain a characteristic essence of the active substance azulene and a mixture of other substances (salicylic acid, oleic acid, stearic acid, alpha-bisabolol).
The fruit of the chamomile is a csip about 1 mm in length, light color, without pappa.

Cultivation –
Chamomile is a wild plant that grows in Italy throughout the territory. It prefers dry terrain of uncultivated fields or country paths. Chamomilla Matricaria can often be confused with Chamomilla Inodora, which differs from the first one due to the total lack of aroma, hence its medicinal properties and the peel that is empty.
Despite growing in the wild, it is possible to grow the chamomile both in the plain and in the hills. To do this you must choose places with good exposure, where the soil is dry, poor and slightly calcareous.
The multiplication of this annual is done by division of the bushes or using the seeds produced by the pea before the full bloom.
Seeding takes place in seedling in the summer months, so that it can be transplanted in young plants early in the fall. You can also opt for a sowing directly in the ground, this should be done preferably in the spring months: during sowing small seeds should be added with sand so that they can be distributed evenly.
When the first leaves come out, it is advisable to run a thinning, spacing each plant from about 15 to 25 inches apart.
In the first stage of growth, up to the enhancement of the radical apparatus, the camomile needs constant moisture, then it will be able to withstand even drought periods.
It is important to remove the soil from mites, as they could prevent the development of the chamomile. It happens very often that the chamomile, when cultivated, is able to disseminate itself.
Chamomile harvesting takes place in full bloom, this is the time when the plant is richer in active ingredients. Despite being very fragrant, only the caps are used, because in these the active principle is concentrated.

Preparation Mode –
Chamomile can be prepared for indoor use –
To seduce the spasms of the stomach, intestines. It is useful against kidney and biliary colic. For those who suffer from gas as it regulates the intestines. In case of heavy digestion, calm nausea and vomiting, it slightly stimulates appetite. It lowers fever and stimulates breathing. Calm the head aches and some neuralgia. It is antiallergic.
You can get an Infusion as follows: Prepare with 5-10g of inflorescences in a liter of water (about 5-6 inflorescences per cup): take from 3 to 6 hot cups a day.
For outdoor use camomile is an allergy especially when combining internal use (herbal tea) with the exterior (peeling, nasal irrigations). Wash wounds, ulcers and skin infections. In case of conjunctivitis or eye irritation. Against hemorrhoids through anal washings.
With chamomile it is possible to do eye, nasal or anal washings. They are made with a slightly more concentrated infusion than the one for internal use (up to 50 g of inflorescences in a liter); Let it rest for 15-20 minutes and filter carefully before using it. To seduce the spasms of the stomach and the intestines. It is useful against kidney and biliary colic. It is used as an anti-inflammatory for eczema, eruptions and other skin diseases.
Also for therapeutic use it is possible to relax the bathroom.
This is prepared by adding to the water from the 2 to 4 liter tank of concentrated infusion; These warm-water baths perform an effective relaxing and soothing action.
Camomile can be used with wraps. With concentrated infusion, they apply on the area of ​​the skin wound. And this also applies to lumbago, torsion, rheumatic pain and bruising.
Clutches with chamomile oil can be made, which is prepared by heating in a bain-marie, for 3 hours, 100 g of inflorescences in half a liter of olive oil; The oil is filtered and stored in a bottle.
The chamomile’s nutritional properties are known to the hair and to the scalp; It is also used to lighten blond hair that with time tends to brown: for these purposes you must prepare a chamomile flower infuser, let it cool down, filter it and then use it regularly after the shampoo, at least once or twice a week.
Finally a recipe that can be prepared using chamomile heads: take slices of whole bread, preferably the day before, rub them with a clove of garlic and sprinkle them with the yellow capsules of fresh chamomile flowers. Place them aligned on the oven plate covered with a lightly oil-colored aluminum foil. Spread on each of them a pinch of salt and one of the ground pepper at the time and a dash of olive oil. Heat the oven to 200 ° C and put toasted bruschetta for 10 minutes and then serve it warm.