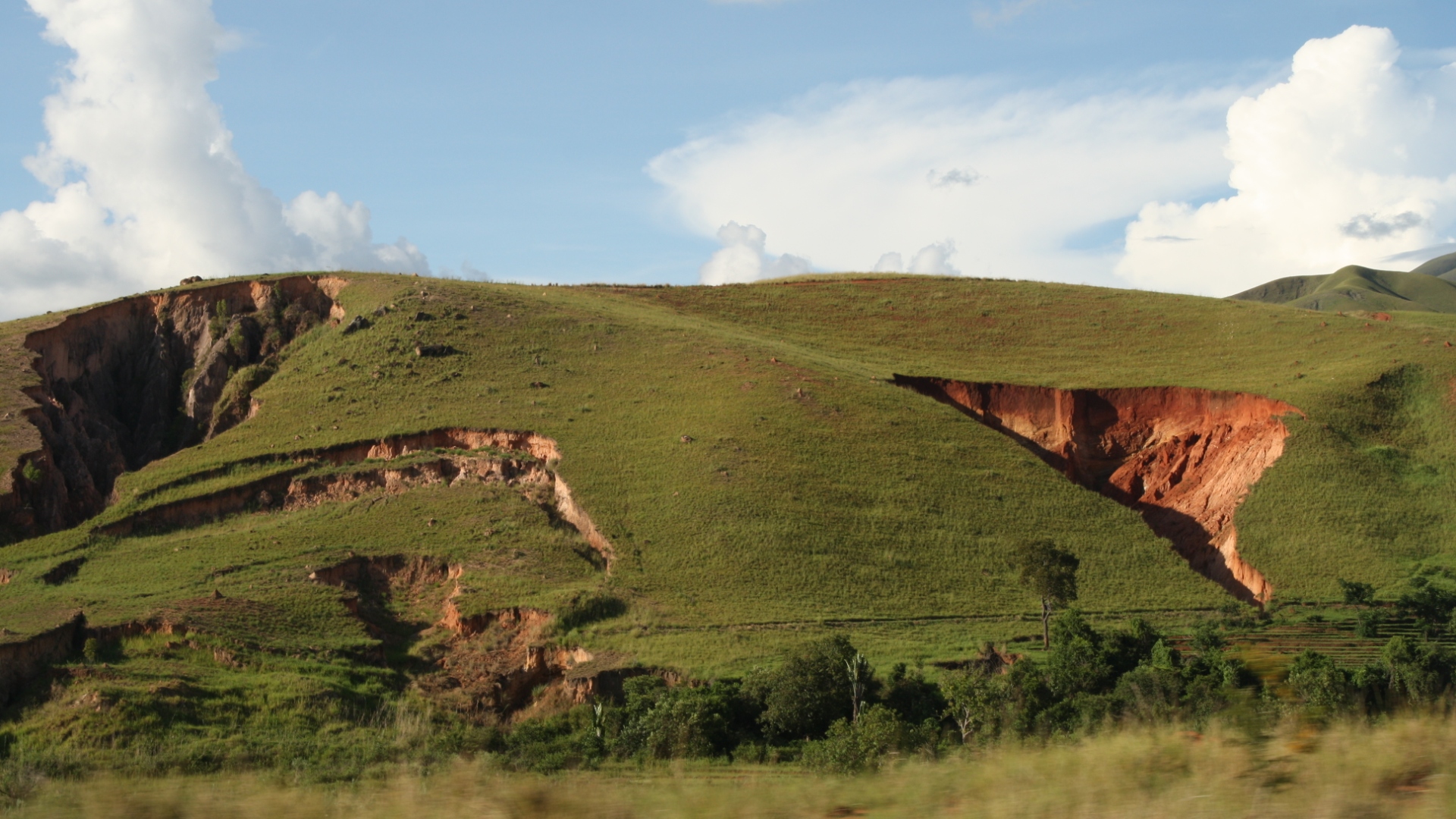 According to recent studies, approximately 11.4 % of the European Union (EU) territory is estimated to be affected by a moderate to high level soil erosion (more than 5 tonnes per hectare per year). This estimate is slightly lower compared to the previous estimations that 16 % of EU’s land area is affected by soil erosion. This reduced rate is mainly due to the application of management practices against soil erosion which have been applied in Member States during the last decade. About 0.4 % of EU land suffers from extreme erosion (more than 50 tonnes per hectare per year).

Around 12.7 % of arable land in EU is estimated to suffer from moderate to high erosion. This equates to an area of 140 373 km² (more than entire surface area of Greece).
Mean rates of soil erosion by water in the EU amounted to 2.46 tonnes per hectare per year. The total annual soil loss is estimated to 970 megatonnes.
Permanent grassland and pastures occupy around 9.3 % of the erosive lands in EU-28. Around 10 % of those permanent pastures is estimated to suffer from moderate to severe erosion, which equates to around 38 900 km². This demonstrates the importance of maintaining permanent vegetation cover as a mechanism to combat soil erosion.
Conservation and management measures (reduced tillage, management of plant residues and winter crops, contouring, stone walls, grass margins) had a significant impact on reducing soil loss (9.5 % on average) in the EU during the last decade.
Erosion can be defined as the wearing away of the land surface by physical forces such as rainfall, flowing water, wind, ice, temperature change, gravity or other natural or anthropogenic agents that abrade, detach and remove soil or geological material from one point on the earth’s surface to be deposited elsewhere. When used in the context of pressures on soil, erosion refers to accelerated loss of soil as a result of anthropogenic activity, in excess of accepted rates of natural soil formation.

The loss of soil leads to a decline in organic matter and nutrient content, the breakdown of soil structure, a reduction of the available soil water stored, which can lead to an enhanced risk of flooding and landslides in adjacent areas. Nutrient and carbon cycling can be significantly altered by mobilization and deposition of soil, as eroded soil may lose 75 – 80 % of its carbon content, with consequent release of carbon to the atmosphere. Soil erosion impacts strongly on the environment and has high economic costs; to mitigate these effects, soil and water conservation strategies are required.
Soil erosion by water is one of the most widespread forms of soil degradation in Europe. Map 1 shows the soil water erosion across all land surfaces in the EU. This map presents the mean level of soil water erosion in administrative areas by NUTS 3 level with a range starting from a very low level (less than 1 tonne per hectare per year) to a level which is considered as high (more than 20 tonnes per hectare per year). Map 2 represents the estimated water erosion in tonnes per hectare per year with a ground resolution of 100 m x 100 m across all land surfaces in the EU.
Several countries in the southern part of Europe show mean erosion rates that are significantly higher than the mean value for EU. However, countries with low mean erosion rates may contain areas where erosion rates are significantly higher (and of course, vice versa).
In the EU, one of the main policy instruments to promote a more environmentally friendly agriculture was introduced by the Common Agricultural Policy (CAP) reform in 2003, through the so-called cross-compliance. According to this mechanism, the farmer support payments were conditioned by respecting the environmental, animal welfare and food safety standards. This led to the definition of Good Agricultural and Environmental Conditions (GAEC) firstly established by Council Regulation (EC) No 1782/2003 and subsequently Council Regulation (EC) No 73/2009. The prevention of soil erosion and maintenance of soil organic matter were two of GAEC requirements, which each Member State was obliged to address through national/regional standards such as: I) minimal soil cover maintenance; II) minimum land management reflecting site specific conditions to limit soil loss and III) maintenance of soil organic matter level through appropriate practices including the ban on burning arable stubbles.The implementation of GAEC in the agricultural lands of Member States has helped to reduce soil loss rates. Since no statistical data were available about reduced tillage, soil cover, plant residues, contour farming, terracing and grass margins before the GAEC implementation in 2003, it was hypothesised that those management practices were previously not applied or were only applied to a very limited extent. GAEC has contributed in reducing the overall soil erosion from 2.71 tonnes per hectare per year to 2.46 tonnes per hectare per year (decrease of 9.5 %). The highest reduction of soil loss due to GAEC implementation was in arable land (mean reduction of 20.2 %).
Increasing awareness amongst scientists and policy-makers about the problem of soil degradation through erosion in Europe has made the quantification of its extent and impact an urgent requirement. The identification of areas that are vulnerable to soil erosion can be helpful for improving our knowledge about the extent of the areas affected and, ultimately, for developing measures to keep the problem under control. Italy, Slovenia, Austria, Malta, Greece, Spain, Croatia, Cyprus and Romania have average rates higher than the mean European one. However, such values can be misleading as they may mask the fact that erosion rates in many areas can be much higher, even for those countries that have a low mean rate of erosion. The converse is also true for countries with high values. On the other hand, some countries, mainly in the southern part of Europe, are clearly characterised as being particularly susceptible to erosion.